Aces in Love Series
These books are standalone ace romance novels that can be read in any order.
IN MY DREAMS 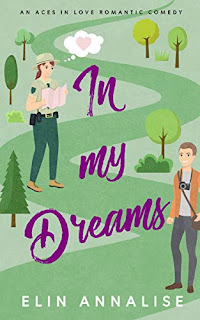 Twenty-five-year-old Polly Brady was supposed to fly off on a dating holiday to meet others, like her, who identify as asexual, but when the nature reserve she works at goes into lockdown after a terrorist attack, she finds herself stuck with Harry Weller, her childhood friend and the only man she's ever loved. There are just two problems: Harry doesn't know Polly's in love with him, and he's also very sex-orientated.Still, Polly knows other couples who have had successful ace/allo relationships, and given she was looking forward to romance this summer, what's the harm in seeing if there is a spark between her and Harry? Especially when the lockdown gives her the perfect opportunity to get close to him.One way or another, Polly's going to make sure Harry notices her--and she's got just the plan to make this happen. Even if the plan keeps backfiring and making her look crazy.In My Dreams is a heartwarming and tender lockdown romance featuring some questionable fancy dress choices, too many bow ties, and a girl who's determined to do whatever it takes to get her man. This is also an #ownvoices story for asexuality representation.
Find In My Dreams on:
Amazon
Goodreads
MY HEART TO FIND 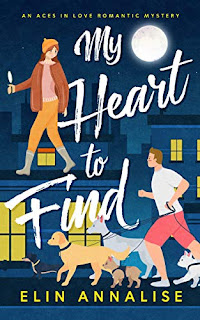 Cara Tate is twenty-five years old, shy, and desperate to find love. The only problem is she's asexual, and all the men she meets on nights out are definitely very sexual. And finding other aces isn't easy--especially when there's no guarantee of a connection.But there is one man Cara knows who is ace and whom she feels something for.Three years ago, Cara and her ace best friend Jana went on a dating holiday especially for those on the asexual spectrum. There, she met professional dog-walker Damien Noelle--the only man she's ever felt a connection with. But she was too nervous to exchange contact information and has spent the last three years strongly regretting it.So when Fate has her path cross with Damien once more, Cara's determined to overcome her shyness and let him know she's more than interested. The only problem is Damien seems very interested in Jana now, and the last thing Cara wants to do is ruin her friend's happiness.My Heart to Find is a heartwarming, slow-burn HEA romance featuring a love triangle, a chronically ill main character, and a puppy who unites everyone. This is an also an #ownvoices story for asexuality and chronic illness representation.
Find My Heart to Find on:
Amazon
Goodreads
IT’S ALWAYS BEEN YOU 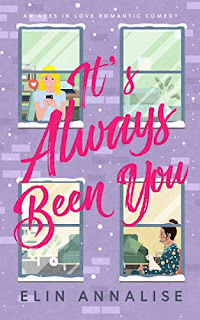 Twenty-six-year-old Courtney Davenport is loud, fun, and always the heart of a party. She's also asexual and runs a talking service for other aces who are worried about coming out.But when her sworn enemy Sophie Sway phones the helpline, Courtney is thrown.Courtney and Sophie have been enemies forever. Growing up at an expensive boarding school that pitted them against each other has ensured their rivalry lasted way beyond graduation. And now Sophie's not just coming out to her--unknowing that it is Courtney at the end of the line--but worse! In the coincidence of the century, Sophie's also moving next door.Furious, Courtney decides to do everything in her power to make Sophie think her new apartment is haunted, so she'll move away. But then the two of them are invited to participate in a reality-style TV show where their rivalry is turned into a game. Now, there's no way Courtney can get away from Sophie as each of them is encouraged to carry out more and more elaborate pranks on the other in order to be crowned the winner.And the more time Courtney spends around Sophie, the more she begins to question her feelings about her...After all, love is a small step away from hate.
Find It’s Always Been You on:
Amazon
Goodreads
Books Published Under Other Names
I also write dark and stormy stories as Madeline Dyer and Elin Dyer, many of which include asexual representation. You can find out more about these books by visiting MadelineDyer.co.uk
A quick guide to how my pen names work from 2022 onward:
Madeline Dyer - dark and stormy stories, YA fiction (traditionally published)
Elin Dyer - dark and stormy stories, YA fiction (self-published)
M. Dyer - adult crime and psychological thrillers (coming soon!)
Elin Annalise - happier fiction: YA romcoms, adult romance, and adult women’s fiction/social studies fiction (first three books self-published, now moving toward traditional publishing)

IN MY DREAMS is out now! I can't believe my first ace romance is out in the world!  Writing  In My Dreams   was such a special process for me. I am asexual, and for so long, I believed that any romance novel I wrote would have to include allosexual characters. I didn't think anyone would want to read about a main character who's asexual, especially if it was a romance novel. I really believed that a romance novel had to include sex--but all I really wanted to write was the romance (because that's what appeals to me). You know, those scenes where your characters are falling in love, where everything's new and exciting, where you're really emotionally invested in a pairing.  And where there's also no sexual attraction.   Because that's what it's like for me. I'm asexual, and I don't experience sexual attraction or have a desire for sex. I'm still attracted to people (physically and emotionally), and I'm still very romantic (though man
Post a Comment
Read more

I wrote an Ace Romance!

Oh my goodness, I almost can't believe it! My first ace romance releases in less than a week!  Writing this book has been amazing--and so, so validating for my own identity.  I'm asexual, and I'm a romance writer. When I begun my romance-writing journey, I firmly believed I'd have to write about sex. I mean, I started with my Rose Haven series (the prequel, When We Were Young, is out now, with book one following next year), and while I love those characters, I always felt a bit 'stuck' when it came to writing the sexual chemistry and the sex scenes. Because, well, I haven't experienced those feelings. I don't understand sexual desire. I've never looked at someone and felt sexually attracted to them.  I realised I was ace (asexual) in my mid-teens. I'm now in my mid-20s, and this hasn't changed. At first, I kept my asexuality a guarded secret. I didn't know how people would react. I'd had therapists suggest I was broken, and friends s
Post a Comment
Read more

Introducing WHEN WE WERE YOUNG!

I'm so excited to announce that my first short story will be releasing on October 29th, 2019! Introducing When We Were Young :  It's been eight years since Emma last saw Oscar, the love of her life. Eight years since their messy breakup. She never wanted to see him again and relive that pain, but then she finds his photo album among her boxes of college things. Oscar never met his parents. They died the day he was born, and the only connection he has to them is through the photo album his grandmother gave him. A photo album he thought he'd never see again. When Emma returns the photo album to him, Oscar discovers it's not just the album that's been missing from his life for the last eight years. But can Emma ever forgive him for what he did? When We Were Young  is a snack-sized read about young love and second chances. This is a short read--perfect for reading during a break time--and I can't wait to share it with you!  When We Were Young is
Post a Comment
Read more